The other day, Gideon went off to meet up with an old friend who is from Santiago, Chile. Sarah and I, having been eating rather monotonously a home, went to lunch at a vegetarian restaurant. After a fifteen-minute walk through attractively bustling streets (we very much like the parts of Santiago we have seen), in the pleasantly dry heat,

we nabbed the restaurant’s one free sidewalk table. It was a two person, small, square, wood-topped pedestal, separated from its neighbor to the side by just enough inches for us to feel we were at a private table, but not too many inches as not to afford natural-feeling, inter-table conversation.

A kind of perfect placement, if conversational options are your eating-taste. Friendly, as we are, we struck up a conversation with our neighbor, which he actually initiated more than we did, which lasted an hour-and-a-half or more of our leisurely lunch of one-course plus coffee. Travelers, it should be a truism, are more likely to converse with strangers than non-travelers are. After all, travelers are underway for adventure and newness and discovery, and their world of available family and friends and colleagues and acquaintances has radically shrunk, so what better way to seek out the new and to fill in the social void than by talking with people seated nearby in cafes, particularly when they turn out also to be travelers and therefore of a similar conversational positioning?

Our neighbor Ash is an aerospace engineer from the UK, working to design the interiors of the sky-high airplane cabins of which we have caught only walk-through-glimpses during our current travels. 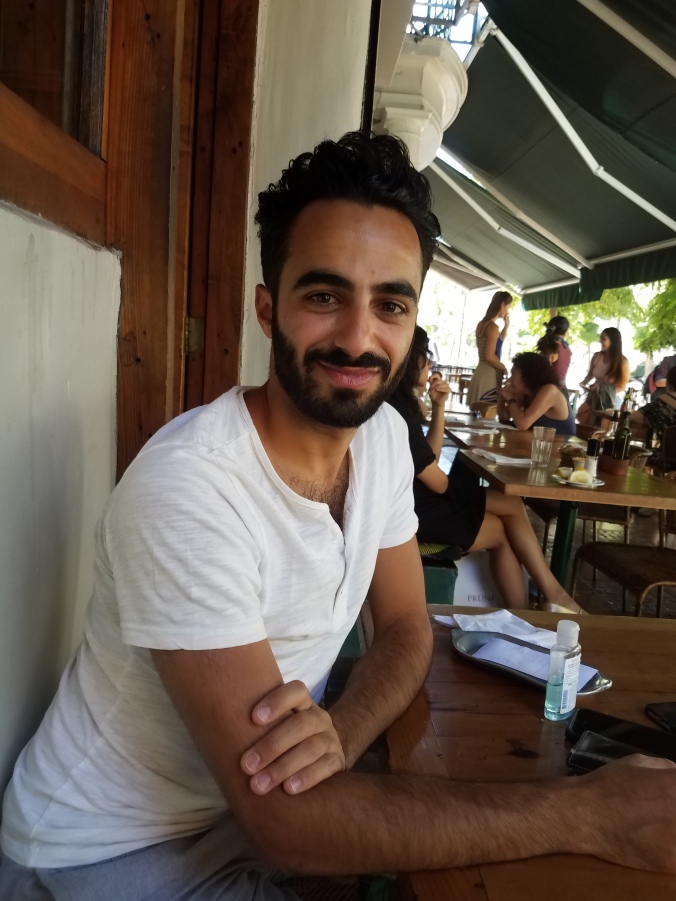 We learned a bunch about his business and saw cell phone photos of the recently unveiled super-first-class 70th anniversary cabins on Singapore Airlines, the production of which (if I understood correctly) he oversaw. We told him that the Boeing 787, called Dreamliner, has, with its better air, quieter interior, expanded overhead clearance, and improved lighting, made our travels notably more pleasant. Beyond the what-do-you-do conversations, which were more extensive and substantive than is usual in such casual encounters, our good-natured exchanges included Iran, as Ash is of Iranian descent, the UK, Brexit, world order, high-tech education, Israel, Jerusalem, and, all but unavoidably, Trump. He told us that he can’t go to the US as he’s subject to the US travel ban. This is so even though he’s a UK citizen and even though he’s through-and-through British, as he was born there. Because he holds dual nationality with Iran, he’s Verboten-fruit.

The conversation, which was fully two ways (us<->him) was lively and respectful throughout. Ash is intelligent, open, and curious. We parted with good cheer and an exchange of contact information (and he received this blog’s address).

I recount this not because the episode was remarkable (such as coursing the Serengeti or visiting a township in South Africa) or because we developed with him a dense and potentially ongoing relationship (as we did with Zadock and with Kevin) but because it wasn’t. Much of traveling consists of non-remarkable moments, events, encounters, which may be thoroughly enjoyable (this was) but which doesn’t rise to guide-book worthiness.

I could have just as easily written about the woman whose Airbnb we were renting, as she, a Chilean architect, spent considerable time speaking with Sarah about Sarah’s recent book (which she had begun to read, loved, and said it has finally given her a way to conceptualize and articulate what she does in her work), and about her own architecture, showing Sarah images. She exuded warmth and passion while we sat speaking at the dining table of her Airbnb which — true to her architectural ethos of creating what Sarah champions, “enriching environments” — she had renovated.

Ash came off as an entirely likeable, indeed a lovely, person. Our time with him and so many other incidental people help structure, populate, and enliven our travels and our memories of specific places and moments, as we spend all this time away from our family and friends.