From what we saw of New Zealand’s more populous, though hardly human-overrun, North Island, its landscape suffers a poor comparison with the South Island’s. But with hardly anywhere else’s! We appreciated its wonders, at least the ones we targeted, with a deep sense of fulfillment (which Sarah has already conveyed regarding the Tongariro Alpine Crossing). In retrospect, we should have journeyed from North to South because the nagging sense that, with takeoff from Christchurch, we had left nature’s paradise, slightly occluded our capacity to experience the North Island with as much wide-eyedness as it warrants. One place that succeeded in earning a top spot in our greatest hits album (maybe that’s this blog) was in the volcanic Rotorua region, which includes the Tarewera, a volcano that has erupted 5 times in last 18,000 years (one so extreme that it cast volcanic dust as far away as Greenland), as well as the Waimangu. The last major eruption of the volcanic craters all along Waimangu valley was in 1886, which falls easily within the era of photography. The Waimangu Volcano Valley Park exhibits pictures of what the landscape looked like before, and then immediately after the massive eruption which reconfigured the entire surrounding area.

Curated beautifully for a leisurely two-hour stroll, the Park took us past many wonderful landscapes, some of which introduced new words into our vocabulary. Here, for example, is a fumarole — that’s steam emerging directly from the crest of the mountain itself — as well as from the water below. 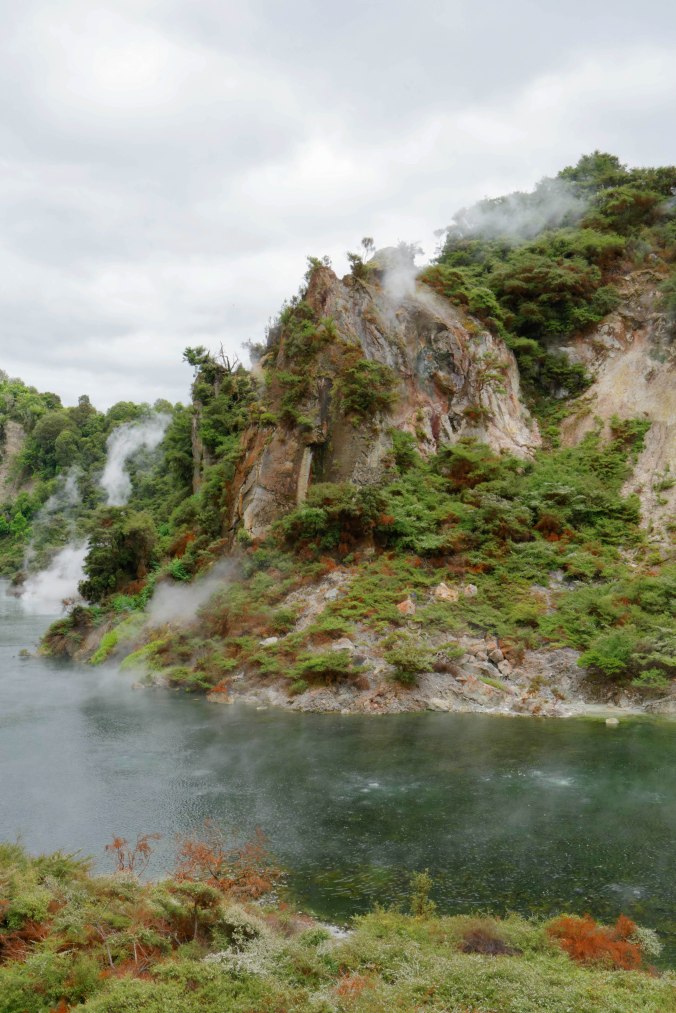 The Waimangu regaled us with hot waters,

and hot (and cool, in both senses of the word) colors,

and with a tiny, even cute little geyser (below, at the left side of the image), wholly unlike the more conventional tower of water we saw a few years ago outside of Reykjavik in the gushing font that gave its name to this natural though relatively rare phenomenon, Geysir.

In all, lovely vistas and perspectives. This entire area of the central North Island, full of volcanic activity, gives lie to common metaphors such as that a person is “grounded” — meaning stable– and that an evidence-based assertion is “on solid ground”. In earth as in nature, it seems, all is entropy, or at least, restless, perpetual change. New Zealand prides itself on its trees, and its lumber industry is one of the largest contributors to the national economy. At the Waimangu Park we ran across a stand of trees that reminded Sarah of one of her newish-ly favorite paintings, by Gustav Klimt, which we saw in an exhibition of landscape art from The Paul G. Allen Family Collection at the Phillips Collection in Washington DC.

We also visited a redwood forest, 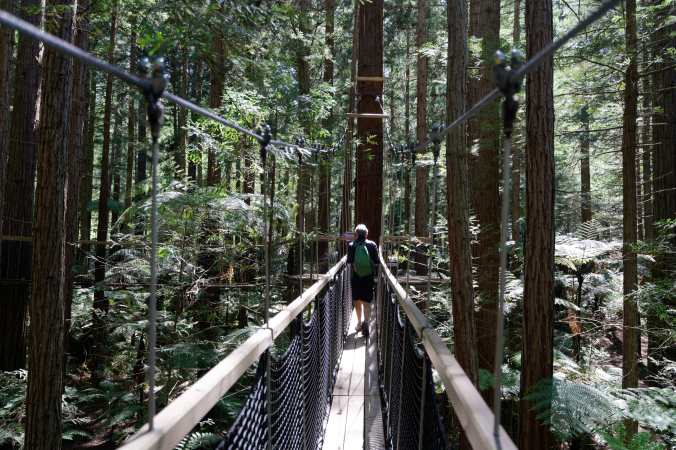 right outside the city of Rotorua, the forest the result of a tree growing commercial experiment which brought the trees over from California way-back-when-enough that the (skinny) redwoods reach (from unverified memory) three hundred feet and more.

And we saw miles and miles of commercial tree forests, some half-denuded. 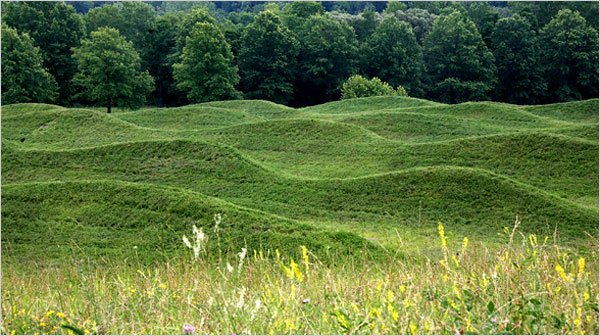 which we once admired, a bit self-mocking. Driving through hours of such hillocks made for the greenest mad-undulating landscape this side of our known experience.

Sarah’s favorite tree — its name escapes us — was that black-barked fern, plentiful in much of New Zealand, which, in rain-forest-y Waimangu Park, grew really tall.