In Auckland, in Queenstown, and most dramatically, in Christchurch, one’s overwhelming impression of NZ is new, new, new. Partly that’s because of the ever-flourishing greenery (Christchurch calls itself “the green city”), yet many other factors contribute to the country’s perpetual sense of freshness. Owing to its isolation –a bunch of islands seemingly floating around in the Pacific – this was one of the last terrains that humans settled, with Pacific Islanders arriving sometime between the 11th and the 13th centuries CE. Since the Maori lived in tribal settlements in wood and thatch, which they rebuilt over and over, the country’s oldest surviving buildings, as far as I can tell, are a handful of dwellings by British colonists from the 1840s onward.

Many if not most landmarks date to the early 20th century, including (surprise!) a  sumptuous little Carnegie Library in Hokitika on the west coast, which we stumbled upon en route to Christchurch, driving up the South Island’s west coast.

Despite, or perhaps because of these comparatively slender historical pickings, everywhere we went, we were struck by the determined celebration of local history. (Having spent my 20s with my head, arms, and mind buried in archives, it occurred to me that the availability of records, and the manageability of their number, surely helps facilitate this apparent preoccupation with history — NZ’s land area measures around the size of Great Britain, while its peoples number fewer than five million, which is one-fifth the population of New York City’s metropolitan area). Wherever we went, we frequently found ourselves standing in front of bronze plaques and laminated wood signs, telling tales of the explorer who first navigated this or that fiord, who first huddled into this spit of land, accompanied by his herd of sheep; of the colonist who planted this or that specimen tree, died here, did that.

The Maori people were never very numerous on these islands; currently, they account for three per cent of the country’s population. Such gestures go part way to redress past wrongs to these indigenous people, to be sure, but I suspect it and all these other historical markers serve a larger function: that of constructing a robust narrative of NZ nationhood and identity.

Even with these historical markers, in cities, the impression is that you are immersed in the recent or the now, and Christchurch, a city of 240,000 on the east coast of the South Island, is the newest of all this new. In 2011, “the shakes” – a 6.3 earthquake – devastated the central area of the city, severely damaging its large cathedral (built between 1864 and 1904), as well as many other historic buildings.

95% of the buildings in the central business district were either destroyed in the earthquake itself, or declared unsafe, and subsequently demolished.

Built environmental junkie types will know Christchurch from Shigeru Ban’s gorgeous, inspiring Transitional Cathedral, aka Cardboard Cathedral, which stands in as the seat for the Anglican ministry, as Christchurch’s old, heavily damaged Cathedral continues its embattled way toward reconstruction.

The first major building completed after the earthquake, Ban’s TC was constructed largely of recyclable and/or inexpensive materials: huge cardboard tubes comprise the nave’s vaults; translucent, polycarbonate for the roof;

The four rectangular rooms with windows are recycled shipping containers

disused shipping containers serve as the ministry offices. The slight curve of the roof off-axis (the shape is not a perfect triangle),

which creates a subtle, compelling dynamism in the nave,

matched the bubbly personality of Hilde, a sweet, lively woman who welcomed us by proudly revealing that she was “in her tenth decade”, before she told us, quite informatively, about the city, the church, and her congregation.

All in all, in Christchurch you get to see something both rare and thought-provoking. If you were to build the best city you could ex novo, what would you do? Other such experiments exist. In the past: Brasilia, New Delhi, Chandigarh. Today: Masdar in Abu Dhabi by Foster and Partners, and countless new cities in China, but the former remains largely unexecuted, and the latter exercises are so vast in scale that speed of execution and developer profits were systematically privileged over sophistication in design.

Christchurch may be different. It’s too early to tell for sure. Much of downtown remains a vast construction site littered with empty plots of land, monuments to the city’s ravaged state. But even the way the city has approached those voids is impressive. To keep people’s spirits up amidst all those vacant lots, public art has been installed.

The brightly colored animals resemble the sheep, for which NZ is justly famous

And there are murals, along with informal installations, too.

Mural to the left, temporary stage for impromptu performances at right 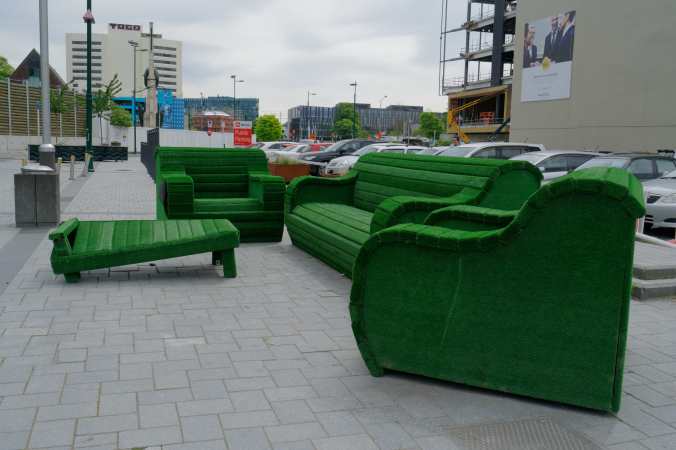 Building has proceeded slowly in the Central Business District — Christchurchians grumble about it, then shrug, adding, it’s a great city. The CBD has been divided into precincts for retail, “innovation” (which I gather means hi-tech), health, performing and visual arts, and “justice and emergency services”. Dozens of large new buildings are under construction: a new metro sports facility, a new central library, a new convention center. A new transit and bus station opened recently. 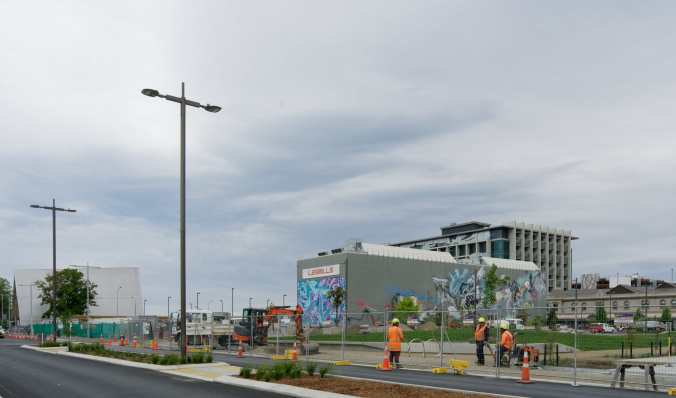 New park under construction, with Ban’s Transitional Cathedral to the left

Large green strips of new parkland and green plazas solves one of the central problems of rebuilding; namely, so much less office space is now needed downtown because of people’s increasingly mobile work practices.

If the residential areas are any indication, the results promise to be both instructive and impressive. Christchurchians needed to build homes quickly, so residential development has outpaced commercial and governmental projects. Our Air BnB, called the Little Black Hut, served as a temporary residence for husband-and-wife real estate developers, who had lost their own home during the shakes. Vertical wood siding, stained black, encircles the exterior, and white-stained plywood sheets line its interiors.

A couple of days of walking around the city suggested that the Little Black Hut’s design finesse was not unusual: most homes are small, but the detailing and compositional sensibility even in little cinder block, wood, or corrugated-metal-sided homes looks pretty well done. 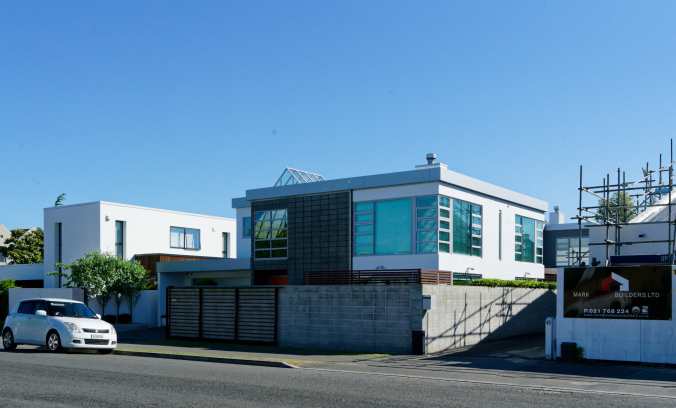 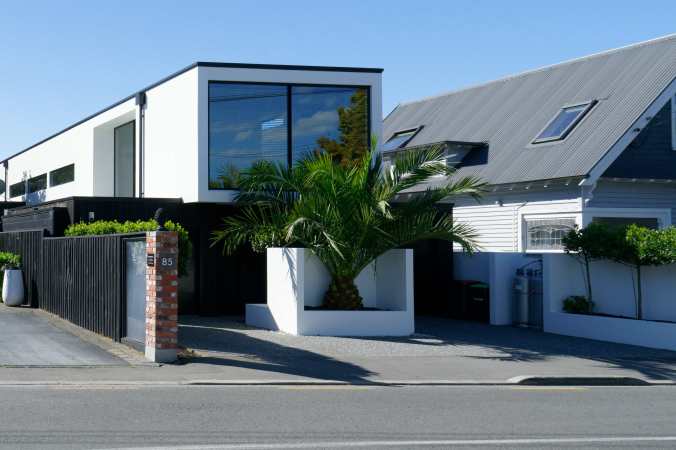 How little we missed the “sense of history” so prized amongst Americans! Running into the few remaining Victorian houses, grand and modest, provided enjoyment but not the sense of relief one finds when stumbling upon even modest historic structures in the United States. What we found in Christchurch substantiates the argument I advanced in WtYW that the problem in the US built environment is less old (better)-versus-new (clueless), but the poor design quality and craftsmanship of new construction. In Christchurch, high quality new homes, commercial, and retail buildings could be found everywhere. Even the mediocre buildings are good.

Stay tuned, then, for the new iteration of New Zealand’s garden city — and dream.