A recent article compared Venice to DisneyLand, reporting that now that its 60,000+ permanent residents receive over 28 million visitors per year, it lacks a complex economy and indeed is well past the point of functioning as an authentic urban agglomeration, having devolved instead into swarms of tourists and selfie sticks buzzing canalside, gaggles of gapers tottering on the cobblestones of a disintegrating city. Crumbling palazzi, pigeon-infested public squares.

Amsterdam, the last time we were here, felt similar.

It was spring; Danny was speaking at a conference on human rights or their violent abrogation. Our flat was near the Rijksmuseum and, memorably, we attended a performance in the Concert Gebouw, across from the now-much-spiffed-up Museum Park.

That visit antedated the Stedlijk Museum’s extremely ill-advised, “Who-could-possibly-come-up-with-that?” And once they had, “How-could-any-client-go-for-it?” giant bath tub of an addition. 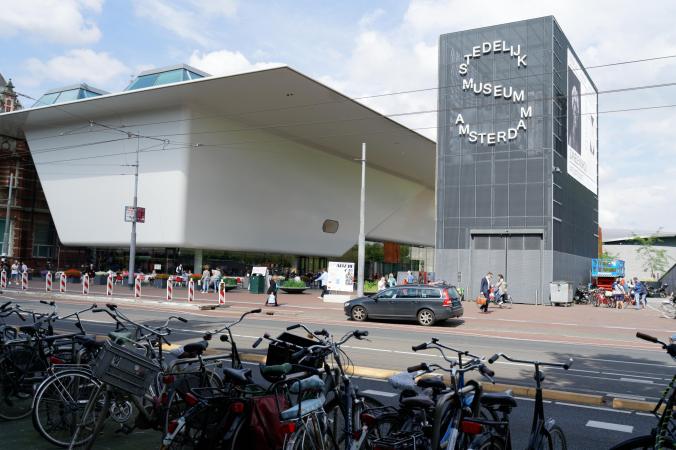 One moment yesterday felt the same: as Veronica and I were gathering our belongings to leave an outdoor café near the Oeust Kirche, three people slammed into me in succession (none of them pickpockets), and I nearly plowed into a human-sized Mickey Mouse. Or Constantin Huyghens. Whatever. Partly it’s crowds, but perhaps too partly it’s my age: my sister, seven years my senior, recounts that once she let her hair go white she became nearly invisible in public places: waiters ignored her, customer service assistants, probably without even realizing it, bypassed her for the next person in line, smiling their may-I-help-yous right past her.

This time here we are staying a bit outside the Centrum, in a surprisingly reasonably-priced townhouse on a canal near the Vondelpark, on a street named after a Dutch poet-nationalist, Jacob von Lennenskade.

It’s a townhouse-and-houseboat-filled residential neighborhood (supermarkets, haircutting salons, the occasional “lifestyle” store), well-to-do to be sure, although not much here seems pricey after the out-of-this-world sums charged for power bars and toilet paper throughout Norway.

In unexpected ways, Amsterdam comes as a relief.

Some of the passersby we encounter on the sidewalks are even shorter than we are. (Tourists, probably.) Populating our neighborhood is an Indonesian vegan retauranteur who emigrated decades ago from the then-Dutch colonies; pitch-skin-black immigrants from Africa, black and brown refugees from various war-wracked, genocidal regions of this troubled world. Amsterdam feels New York-ish socially, then, without being at all like New York in most ways. Its vertically squeezed, low-scale, occasionally heaving-to townhouses insist:

This city is for walking (and biking). Drive uncomfortably, and at your peril. Later we learned from a cabbie that the municipality charges 130 euros per month just to permit taxis to drive downtown.

If wild Norway was all deep, black-green fjords, one-lane highways and desolate expanses of rock-strewn shorelines and pine-covered mountains, here in the Netherlands, every square inch of land has been fought for, conquered, and tamed. The environment – all of it’s a built environment – gives off the sense of being optimally planned for human use. The way the Dutch manage urban traffic crystalizes their approach to the design of nearly everything: most larger urban streets facilitate the flow of six forms of locomotion: pedestrians, trams, buses, bicycles, motor scooters, and cars. And the occasional line of Segueys, hovering unevenly at street corners.

Pedestrians crossing a street wait at a different crosswalk than cyclists do. Streams of cyclists pedal by at all times of day, some with one or two little blonde children perched unsteadily atop, one set into a contraption affixed to the handlebars, the other behind; bypassing these pseudo-juggernauts are men in skinny suits and ties and fashionably clad women in stilettos, delicately holding down the flaps of their skirts; all pedaling by in the morning rain.

Ever since I first landed in Schiphol twenty-two years ago, pregnant with Veronica and desperate to flee my increasingly-lunatic and violent spouse (now gone), I have conceived of the Netherlands as a kind of utopia, and called it the Land of Good Design – but really, it’s the Land of All Good Things. Unbelievable art. 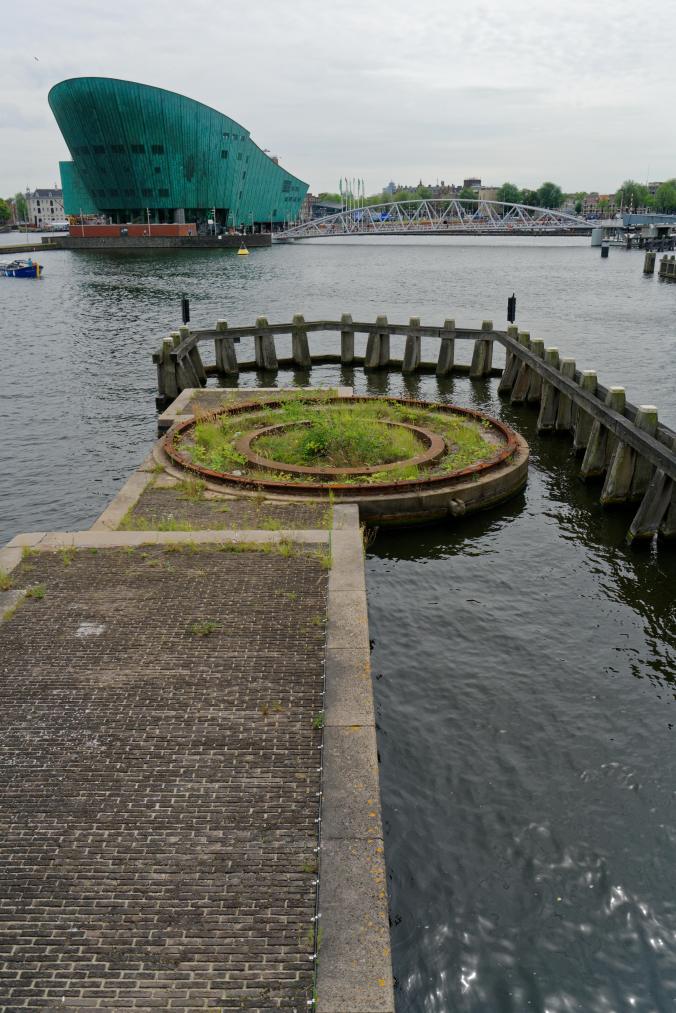 Etc. I know, I know: tongue firmly in cheek. Netherlands has problems too. Just ask Rineke Dijstra, or Marlene Dumas.

Still, when my first marriage was rapidly disintegrating, my adored father was literally dying, and a child tenaciously growing within me, the Netherlands offered itself to me as a land of respite. I’d come to do what I knew how to do, no matter what: work. To see, photograph, and research postwar buildings by architects loosely affiliated with an international group of self-proclaimed renegades, Team 10 — and to put myself back inside myself. And I loved it. Even the ordinary warehouses are well-maintained, cleanly detailed, I remember thinking, like crisp ironed shirts just back from the dry cleaners.

I feel as comfortable here as if I were in New York City; I’m sure there would be cultural frisson were I to live here full-time, but as the transients that we currently are, it’s difficult to tell where those moments would come from, or when they would occur. Occasionally, as I walk around the oldest part of the city, those torrid scenes in Donna Tartt’s The Goldfinch from Theo’s weeks in Amsterdam– 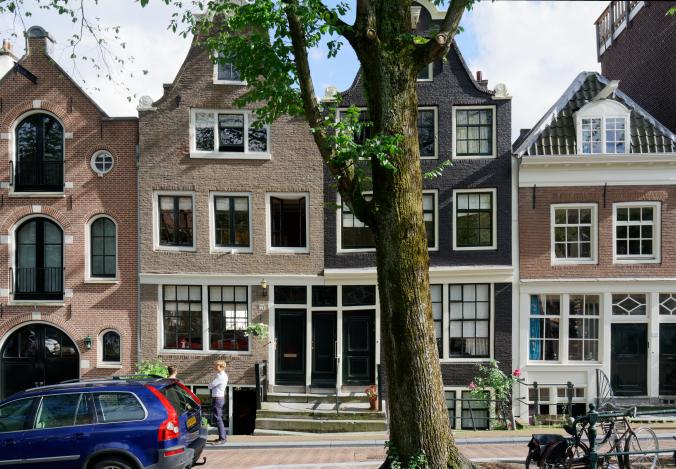 when Theo was strung out and holed up in some hotel, terrified, feet more mired in some dank, hallucinatory underworld than grounded on this one — waft through my mind. But then the cool summer sunshine burns such disturbed thoughts away.

Kathryn Gustafson’s Cultuurpaark Westergasfabriek, with its birds flying high and grasses hissing in the winds, was a special treat. 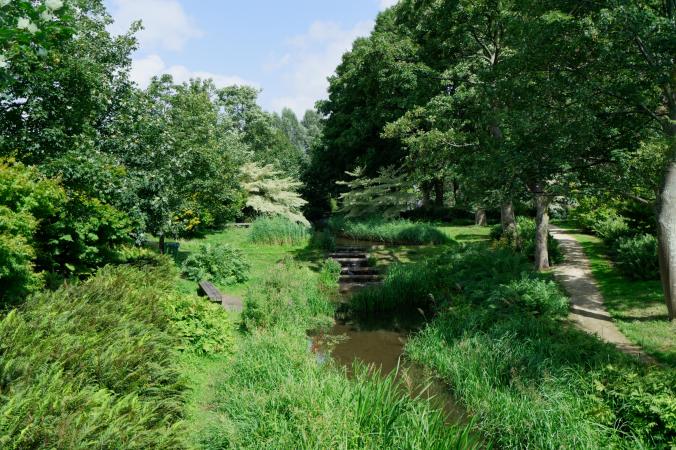 One thought on “Goldfinches in Amsterdam”