I found Morocco the least interesting place we’ve visited, which is not so much a knock on Morocco as a testament to how fabulously captivating and invigorating our journey’s country-stops have been. After Marrakech, we spent two days driving through the Atlas Mountains on demandingly narrow and windy roads, 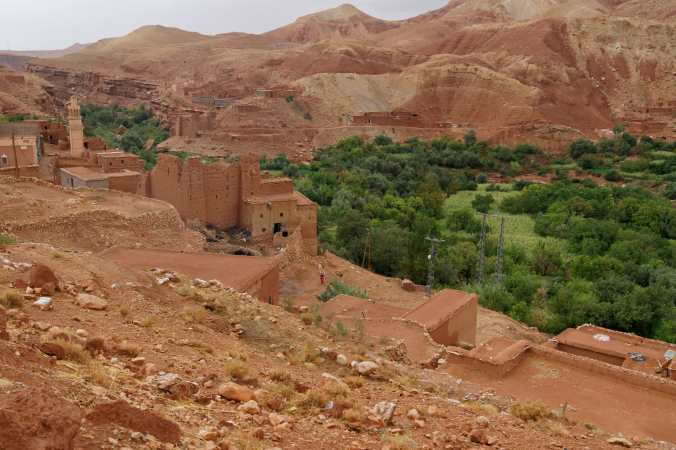 and visiting two historic sites, one barely on the beaten track and the other of movie and vernacular architectural fame.

The first was in Telouet, the former stronghold of the leading French collaborator preceding Morocco’s independence in 1956.

Only a few ornate rooms survive of his Kasbah, and — in their materiality, design intricacy, and integrated composition — they offer a splendid example of Islamic decoration/craft/art.

One central room is spectacular.

Sarah, Gideon, and I had an ongoing discussion both about the status of Islamic decoration/craft/art, as whatever its intricacies and pleasing qualities may be, their status as one or the other or the third seems not so obvious, at least to me. A reason I was less enamored with Morocco is that, if its geometric patterning in tile, plaster, and wood is art (which I tend to doubt), then it is art that fails to hold, let alone fascinate, me. Sarah tends to come down on the other side, but I suspect she sort-of agrees with me – Sarah, it’s time to rise to the challenge! Gideon has sided with his Mom but that’s because he sides with himself.

The second, Ait Ben Haddou, is an intact, abandoned town that speaks visually for itself, a fan favorite as the busloads of day-trippers attest.

It is famous as the stage set for films, including most famously Gladiator. We walked in Russell Crowe’s footsteps!!! One merchant (a few structures house tourist-friendly goods) proudly showed us the room in his building where Crowe was imprisoned, and insisted, very good-naturedly, that he and I be photographed there together.

He told us that he was in the film (among five others) and even the princely sum (which for per-capita-income-challenged Morocco it is) that he received daily for six months for his Gladiatorial film work. I imagined I had remembered him in the film, even though I saw it when it came out twenty years ago. I’ll have to check. The town itself is picturesque and suggestive from afar as it steps us the hill,

from which it seems to burst forth fully formed and colored in its earthy turrets and more, but far less impressive to walk through which experientially is nothing special. Gideon dubbed it a dud and even Sarah, who sees it as a vernacular Parthenon, admitted performatively after several dozen minutes (“I’m ready to go”) that there’s not much to see there beyond its overall, stunning profile.

Gideon loves mountains, and the Atlas captured his fancy.

He would have liked to spend several more days in them driving and hiking. They were unexpectedly beautiful, though my need, as our driver, to stay utterly focused on the guardrail-less sliver-thin mountain roads, led me to miss most of it. But the oohs and aahs, and the more evolutionarily advanced modes of expressed-appreciation which Gideon showered us with left the basis for his determination to return to the Atlas unmistakable. Unfortunately for him we had to move on, or, even if we didn’t absolutely have to, we did anyway.

A day of impromptu R&R by the pool in Marrakech, was followed by two days in the vibrant if tourist-site-poor, white city of eponymous Casablanca, which we all really liked and, for its grittiness and vibrancy, liked much more than the far more celebrated Marrakech. We left Morocco without having seen the north, including Fes and Meknes, and having (after Namibia) skipped the desert. I feel no need to return. Sarah would like to. And Gideon intends to. The Atlas Mountains call.