We are sitting in our amazingly overstuffed though comfortable Airbnb rental at 7:19 in the late afternoon of an overcast Oslo day, listening to what Gideon would call a criminally underrated album, Neil Young’s Sleep With Angels. Sarah, two feet to my right in the sitting area’s easy chair, edits photos, a nearly daily activity, about which she has had more to say and will say yet more than I could ever offer, so I’ll move on to Gideon, who listens to the music, unlike Sarah and me, with devoted concentration as he lays on the couch six feet across from Sarah. We are spending a quiet evening (depending on how you conceive of it all) working or recreating in our respective momentary ways, in tight proximity to one another, with our activities punctuated by questions, verbal offerings, banter, repartee, and a fair amount of laughter. I just laughed heartily as I thought about what I might write next. Gideon turned my way, raised his head and said what? I replied I’ll let you know after I write it. Gideon chuckled, a broad smile lighting up his face, with the words that sounds ominous gracing his lips right before they graced Sarah’s and my ears.

I was recalling the jocular riffs which Gideon and I exchanged on and off again during the day, a two-heads-is-better-than-one activity which was set in motion when we began discussing how strange our host’s (to us) unfamiliar Norwegian name sounded to our ears, and what a burden such a name would be to an American child, should his parents in ignorance or cultural defiance confer it upon him. Among the many (we think, Sarah less so) witty and silly things we considered and said was coming up with a roster of the worst (invented) names. Some were euphonious violations, others onomatopoetical virtuosos, some were unprintable – and so to honor the latter, I will refrain from mentioning any. Sarah is probably right about the value of our product, or half right, which in such matters is right enough.

We had a fine day and previous evening in Oslo, mostly walking and taking in its distinctive urbanity and its fabric, mainly known as buildings. 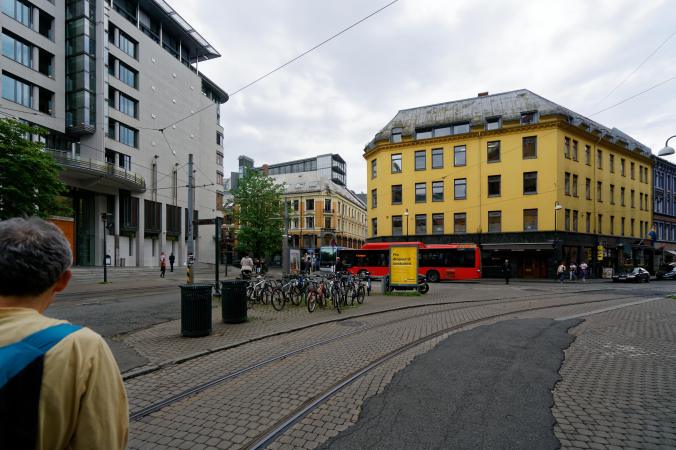 At 7:30 this morning, Sarah and I (Gideon chose to sleep in) also drove to the outlying part of Oslo called Mortensrud to see an intelligent, intriguing, and, without being beautiful or uplifting, inspiring contemporary church by Jensen & Skodvin.

In the early afternoon, just as it was beginning to rain, we visited and marveled at Snohetta’s renowned Opera House.

All this notwithstanding and all the captivating photos Sarah offers you notwithstanding, and all the descriptions and impressions and analyses we also record here for you notwithstanding, for us so much of this already great adventure we spend together in the interstitial moments which are really hours, we do so in a more subtle great adventure sitting near one another, picking up our heads, and sharing a serious theme which one of us raises, or finding humor (profound or silly) in some aspect, large or small, of the human condition, a condition about which our senses have become notably heightened since embarking on this journey, and which I joyfully expect will remain so for the coming year.