One cannot but judge the architecture of the National Gallery of Victoria (NGV- International), on St. Kilda Road in Melbourne, as falling somewhere between the unfortunate and the disgraceful — this photo of kids playing in the plaza outside it makes it look more serenely seductive than it is. And the interiors! Mostly they’re grim, just grim, especially after a renovation completed in 2004 by the Italian architect Mario Bellini, who created new gallery spaces by dropping opaque stone boxes into the existing building’s glass-covered courtyards, thus destroying what was in all likelihood the principal redeeming feature of the original design.

Even so, it’s the premier museum in one of Australia’s two most cosmopolitan states (Victorians will assert, usually only half-jokingly, Melbourne’s superior cultivation and cosmopolitanism in comparison with Sydney, which we heard characterized — more than once — as some kind of over-the-hill Lady of Questionable Virtue). So, as this building houses National Gallery of the State of Victoria, whatever that means, one is obliged to look.

We found: some nice moments, a couple of welcome surprises, a few terrific pieces, and one stunner, a work of contemporary art.

Inside the dark gray perimeter facades sits a single a light-drenched atrium. If you stay on the ground floor and venture toward the rear, you stumble into this.

In the 1960s, Leonard French, a celebrated Australian artist, worked for five years on a stained glass ceiling for what’s called the Great Room, as if this were some kind of edgy update of the great rooms in historic British manor houses. Impressive, and to my eye more pleasurable to behold than the verging-on-kitsch Tiffany glass compositions that the ceiling recalls. The museum’s curators seem a bit flummoxed as to how to use this space; basically, they’ve thrown a few cushiony pieces in there and invited the children in to play. And they do.

Upstairs (where the windows are, on the upper right), we found galleries devoted to the decorative arts, including one offering up an abundance of very fine Wedgewood — all those aspirant 19th-century Australians adopting British tastes, I suppose. I’ve come to appreciate Wedgewood’s refinement quite a lot, thanks to the enthusiasm and beneficence of my beloved mother-in-law, Norma. This amusing Egyptian piece struck my fancy, though Danny predicted that Norma would not take to it.

Though we agreed that this one, below. was just her sort of thing. 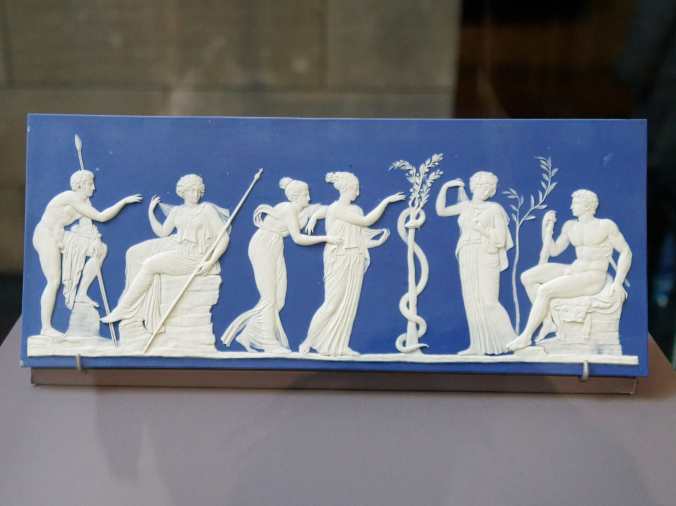 The NGV and the Art Gallery of New South Wales in Sydney exhibit a good deal of Aboriginal Art; this, from Sydney, captivated me with its absolutely perplexing pictorial space.

Back in Melbourne’s NGV-International, this beautiful installation, below, of medieval sculptures made these works-from-another-world arresting in a way that the Metropolitan Museum of Art’s installations in its medieval galleries are not. One oddity: in this openly Christian-dominant country (nativity crèches and decorated Christmas trees appear everywhere in the public sphere), the NGV’s wall texts assume not an iota of background knowledge about the religion or its traditions. One went something along the lines of this: Christians consider saints intermediaries between humanity and the divine. Another offered a careful definition of just what an attribute is, and explained how they function iconographically in Christian art.

Saint Catherine of Alexandria, a scholar-princess who converted many wayward souls to Christianity merely by dint of her incisive intellect and oratorical powers of persuasion, has always been a secret favorite of mine, and this ca. 16th century Catalan representation of her holding the wheel, a torture device that shattered when her persecutors tried to use it on her, stuck with me. I love the combination of her serene, aquiline features and her slightly dynamic but not-quite-contrapposto-esque pose.

Then we practically ran straight into one of the best Hans (aka Jean) Arp sculptures, from his “Growth” series, that I’ve ever encountered. I was really tempted to hug it.

Finally, looking at the art at the museums in Sydney and Melbourne heightened my appreciation for that artist whose work Danny is so taken by, Del Kathryn Barton. We included one image from her exhibition at the NGV-Australia (which is in a different building from the NGV-International, down the street), a couple of posts ago. Danny loves DKB’s complex compositions, jewel-like colors, the over-the-top patterning and refined detail; I appreciate these but just can’t get over the questionable mythologies she’s drawing on in her depiction of women and their bodies. In any case, this painting is quite typical of what’s on display at her solo retrospective exhibition, and I appreciated it more after reading the catalogue essay, which discussed how influenced she is by medieval painting, with its lapidary colors and lack of recessive spaces.

It did occur to me, too, that the busyness of DKB’s surfaces bears affinities to Aboriginal painting — here’s one particularly good example, from Sydney. 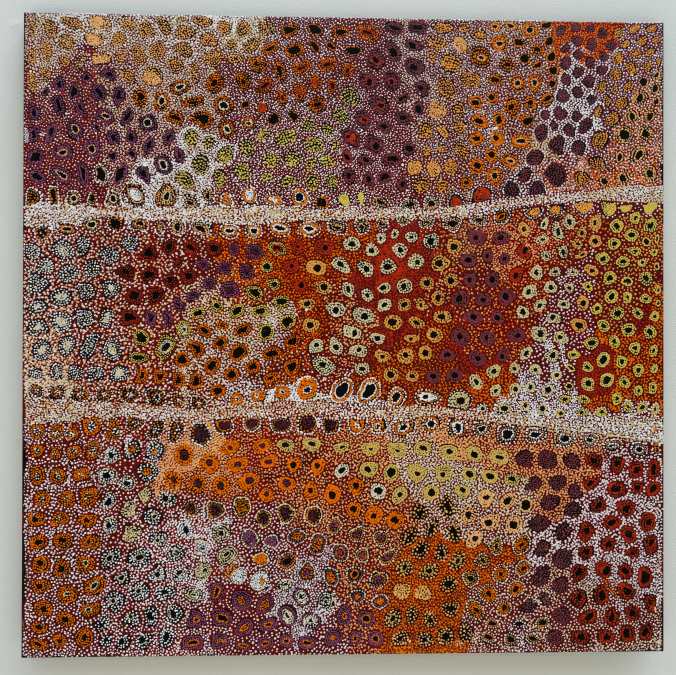 And those big, haunting eyes that appear everywhere in her paintings evoke the haunting eyes in some Aboriginal sculptures, like these two, below.

The NGV Triennial was still in the process of being installed when we visited, but luckily, this piece had already been hung; it became the crème de la crème of our art-scouting day. 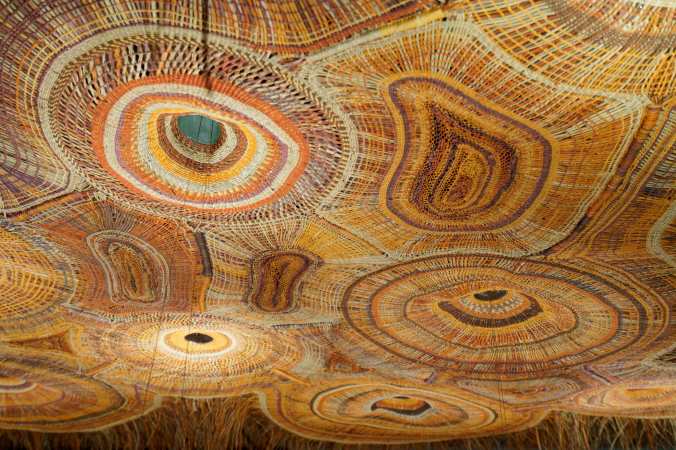 Entitled the PET lamp, this is by Alvaro Catalán de Ocón, a Spanish designer, who worked with the Bula’Bula Arts Aboriginal Corporation to find a group of weavers with whom he could collaborate. They gathered reeds, along with the plants necessary to make the dyes, produced the tints, organized the composition, and wove it. Technically, it’s a chandelier, I guess. Whatever: it’s a stunning, inspiring piece, which the NGV-International’s installation team displayed brilliantly, placing the lamps themselves just above eye level; the large weaving several feet above your head, suspended from the ceiling; and placing circular mirrors on a dais just above floor level. 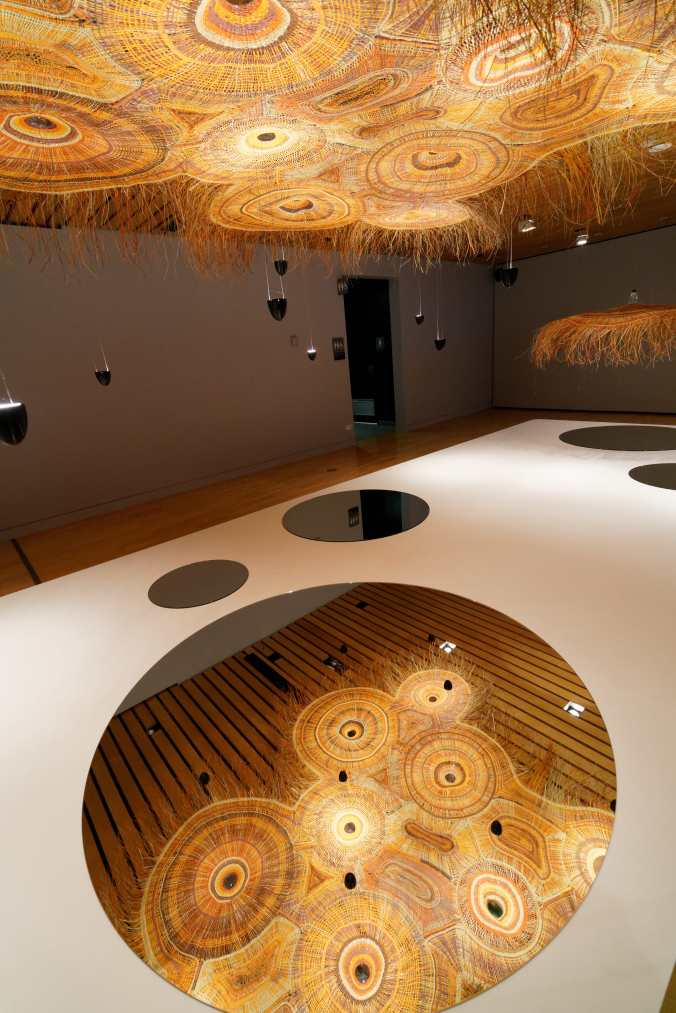 Since mirrors can be used to visually diminish the scale of the object they reflect, you get to experience the piece both as it envelops you, spreading majestically over your head and bleeding into your peripheral vision, and at the same time, regard its entirety by glancing toward the silvery pools of light near your feet.

Seeing this piece set off the kind of all-encompassing, full-body experience of a work of art that is often craved, and rarely realized. Really superb.

Danny’s been complaining that, since I’m always behind the camera, we run the risk of having few pictures of me from the trip. He gets the photo credit for this one.