Frozen in time. From the first day we entered the Kasbah in Marrakesh through the end of our trip to the UNESCO World Heritage site Aït Ben Haddou, that was my overwhelming impression of Morocco. 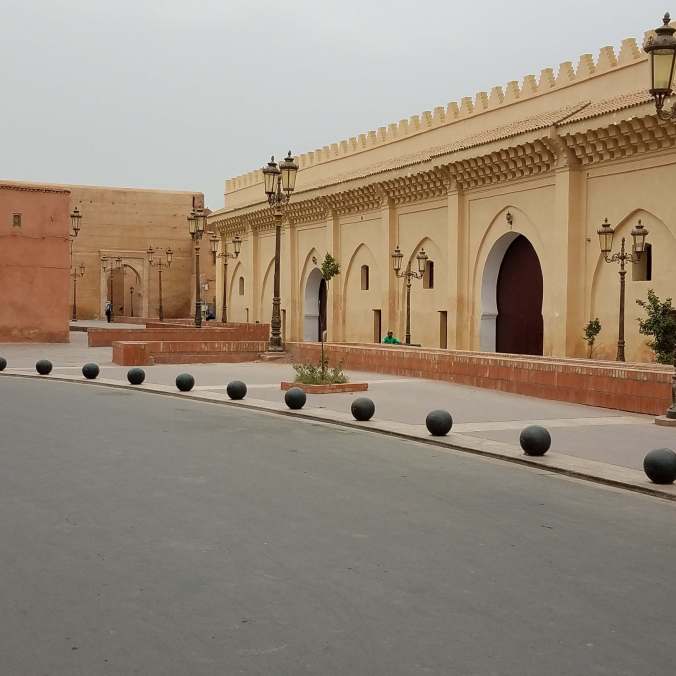 The exception was Casablanca, but Fez, people tell me, confers this impression with even greater intensity. In its sense of arrested time, Morocco felt very different from other developing societies I’ve encountered. Take India. In India, people’s lives are saturated with tradition, but they do not, or at least did not appear to me to reject modernity. In some of Morocco’s most distant reaches, people seem only dimly aware that modern societies even exist. What are they watching on satellite TV? 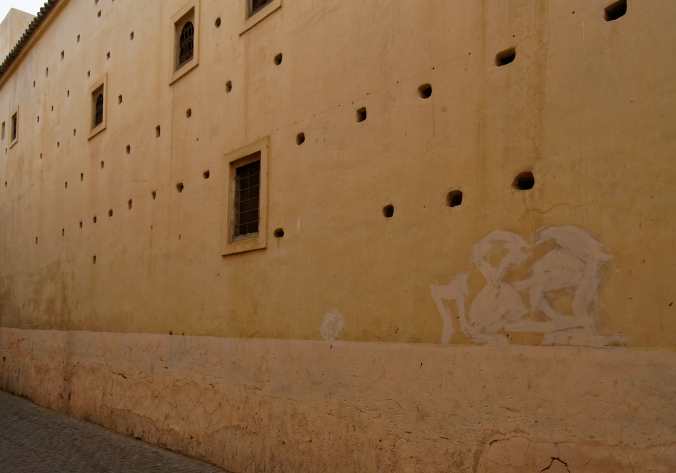 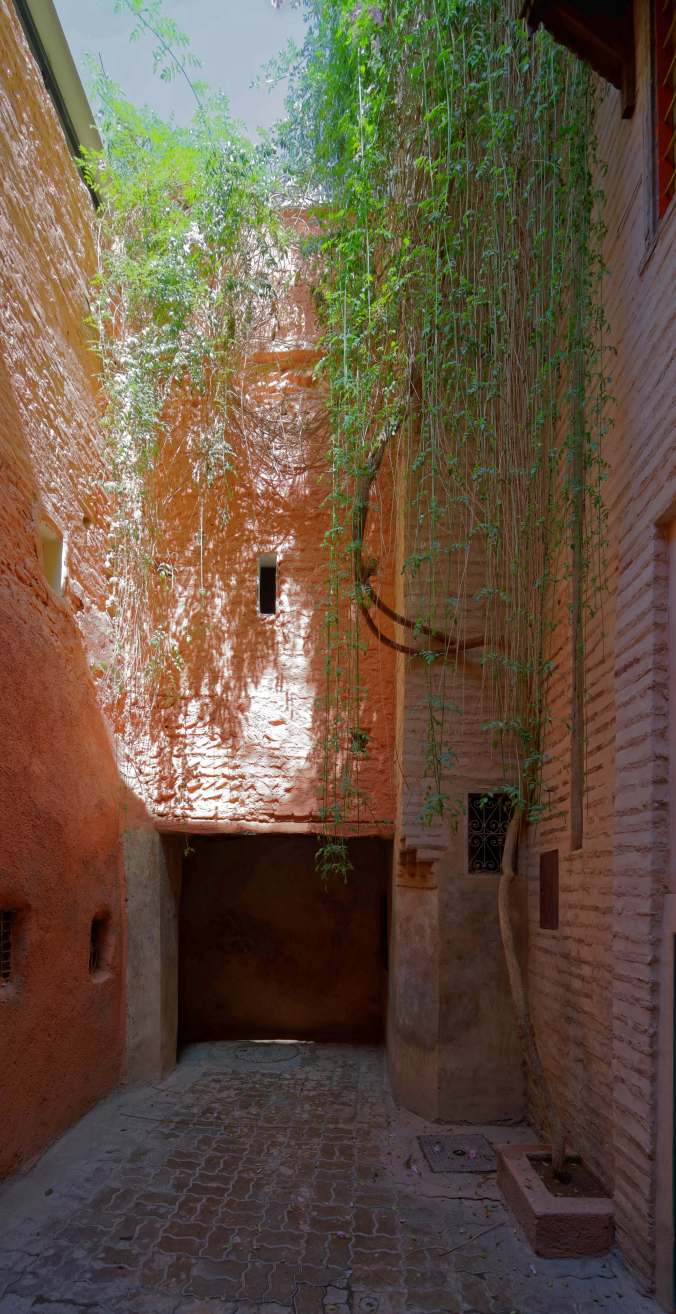 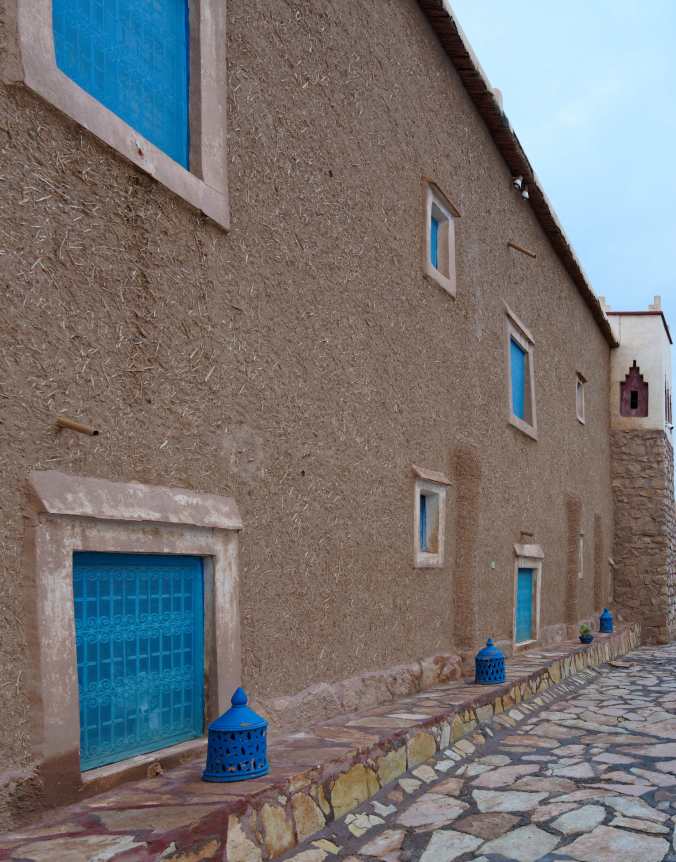 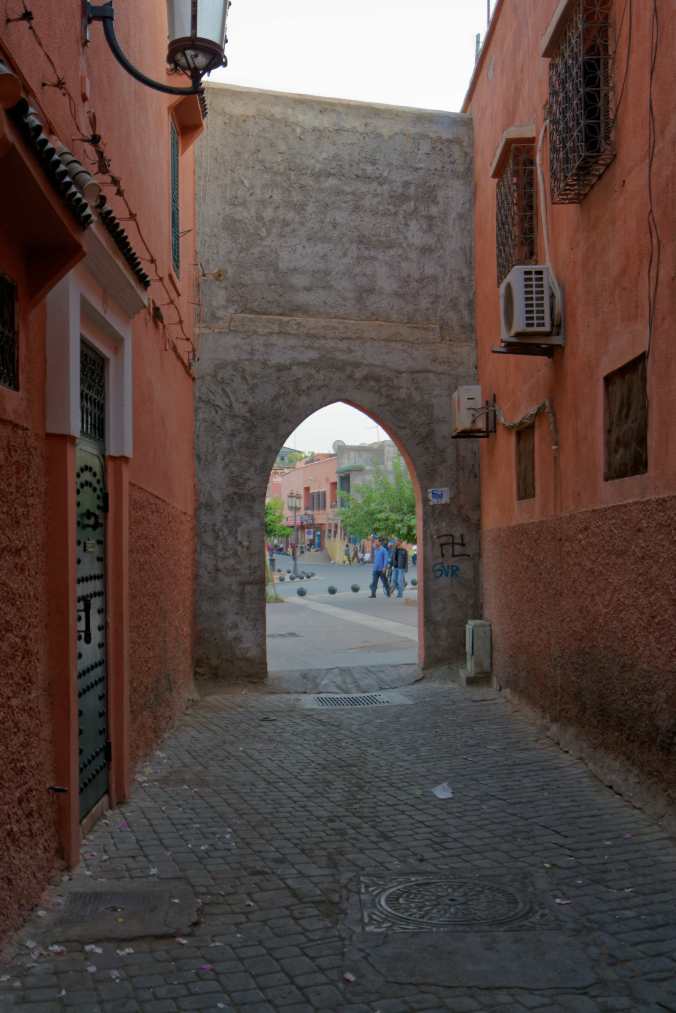 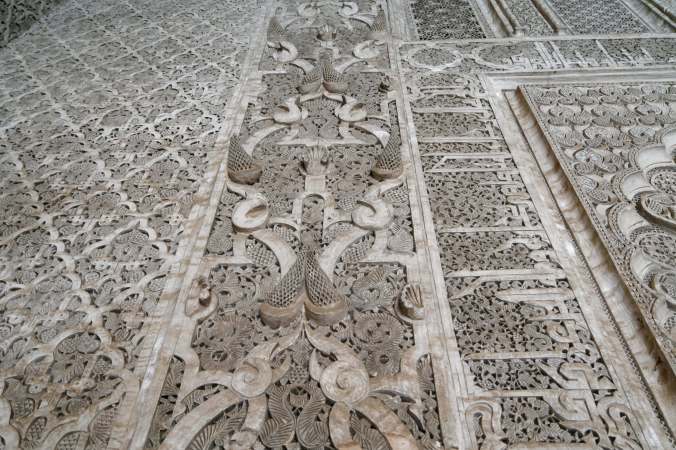 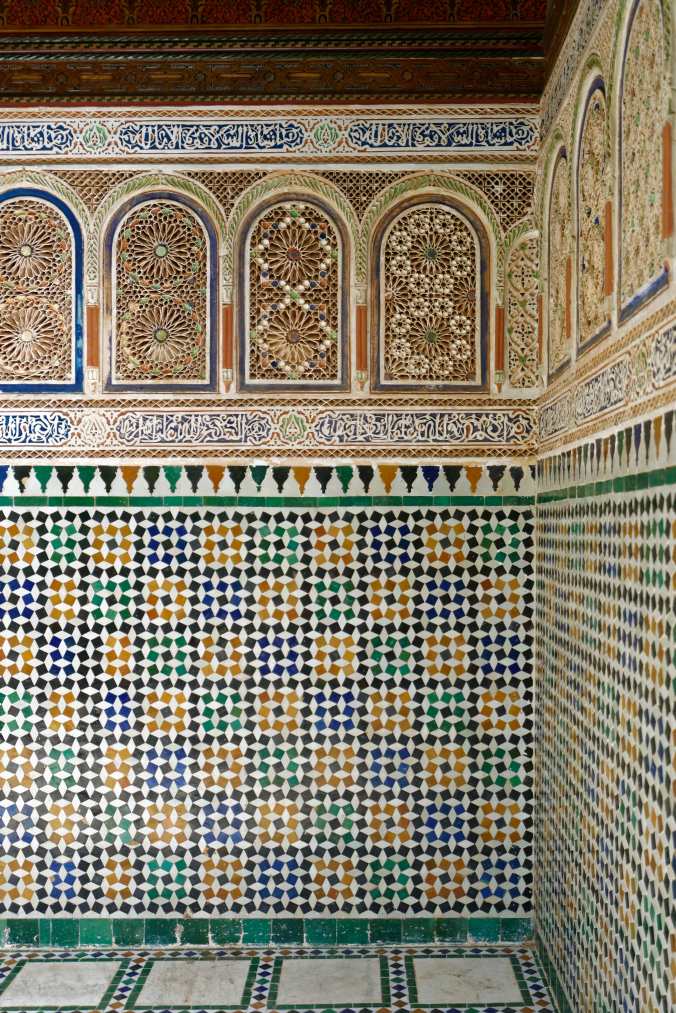 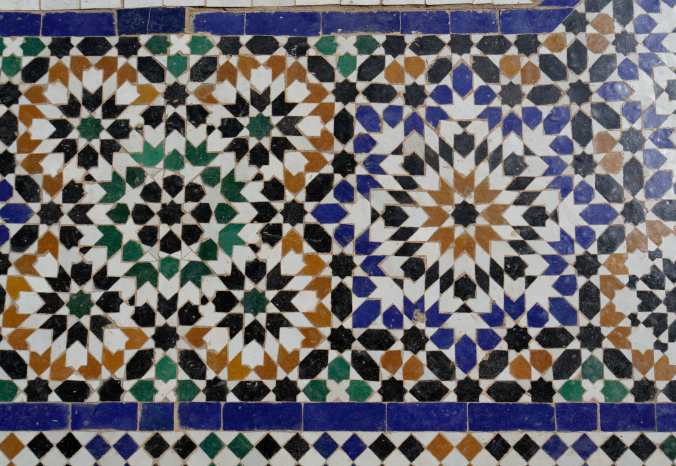 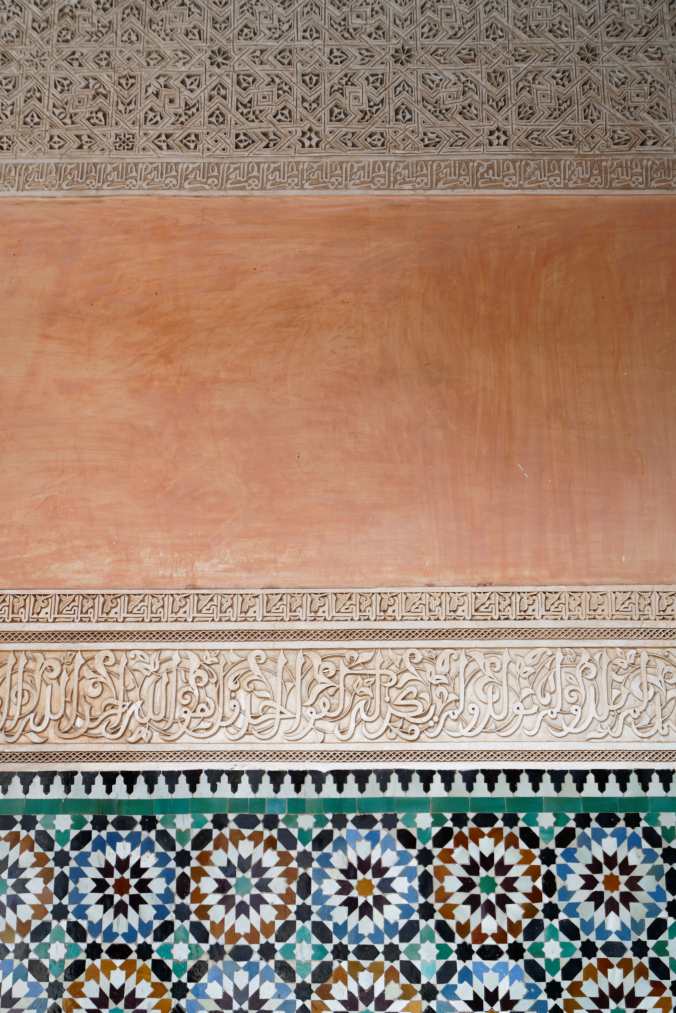 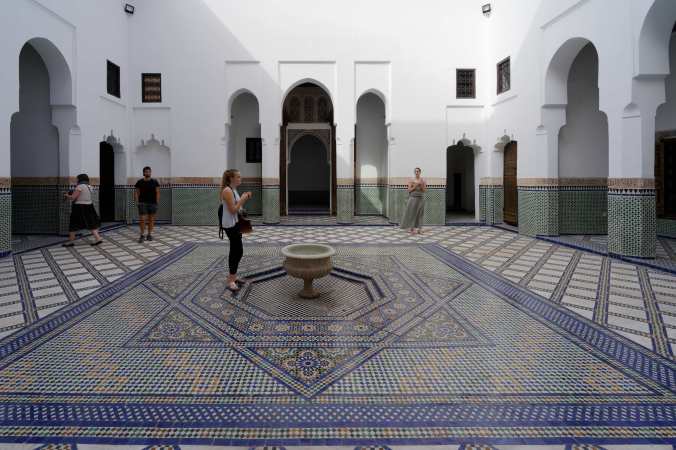 Sometimes, in larger buildings, internal rooms with tiny windows butt up onto rooms opening onto subcourtyards with skylit roofs. 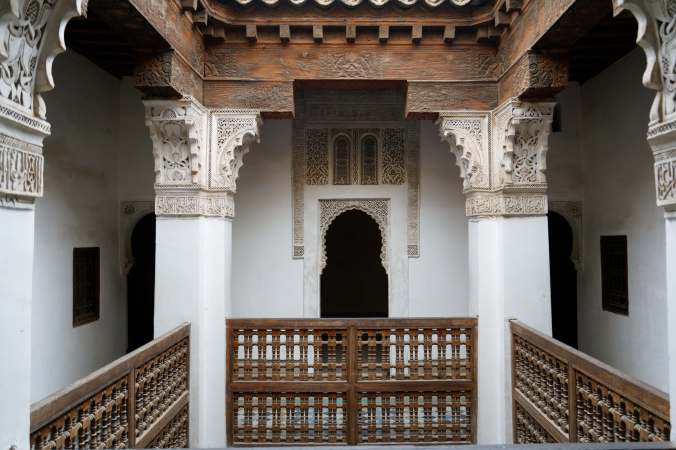 Spatial organization, spatial sequences – all are straightforward, even banal. (If the site varies topographically, sometimes there’s a little more action, as in the palace at Telouet.) So the colorful, intricate patterns constitute the only means of arresting our visual interest — or, to invert the formulation, to compensate for the lack of design complexity.

On the drive from Aït Ben Haddou back to Marrakesh, Danny, Gideon and I discussed this, noting that although we’d seen many of central Morocco’s premier monuments, we’d discerned scant artistic development. Always, Zelig (ceramic tile mosaics) stretching from the floor to shoulder-level; intricate, lacy plasterwork above; then wood, painted and carved, on top (the wood needs to be on top because it spans ceilings, windows, doors).

In no place we visited did that differ.

To explain to Gideon the difference between the architectural tradition as we’ve encountered it in Morocco and the western one, I used painting, with which he is more familiar. Think about what a Giotto looks like, I said. Then compare it to Leonardo’s Madonna and Child in the Louvre, and then compare that to Michaelangelo’s Madonna and Child. The subject is the same; the paintings don’t look at all alike. Each artist, in some way, was trying to express something new, even if he was also building on established traditions. Here, the mosaic work in Telout’s Kasbah (early 20th century) resembles the mosaic work in Marrakesh’s Ben Youssef Medrasa (16th century).

So, art or craft? Reluctantly, I concede: Danny’s correct.

That’s it for Morocco.